The NFL season is in full swing and what better way to celebrate than to show off our next McFarlane’s SportsPicks NFL lineup. Right on the heels of the newly-released NFL Series 30, the NFL Series 31 roster features last season’s NFL Offensive Rookie of the Year, a Super Bowl MVP, the #2 draft pick in this year’s draft, and four of the most exciting players in the league today.

McFarlane’s Collector Level is well represented in NFL Series 31. Tim Tebow stars with a Premier Level CL figure that includes an authentic autograph on a signature plate. Newton & Griffin III have Silver CL figures; McCoy, Cruz, & Murray have Bronze Level CL figures; and Drew Brees will be offered as a Classic Chase in the Saints all black jersey. 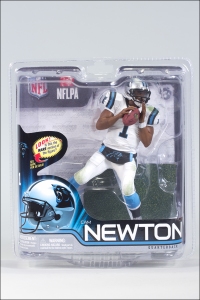